by THE EDITORIAL BOARD 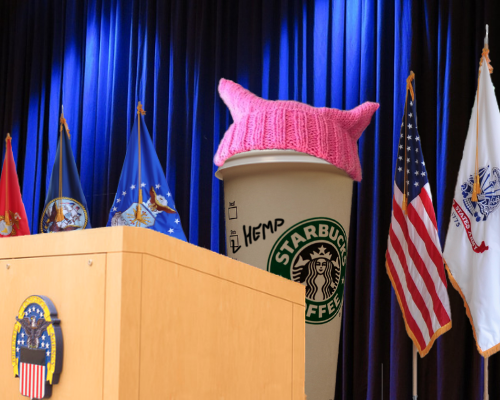 The field of candidates for the 2020 democratic nomination is dwindling. But even as options narrow, many voters are still undecided. The Fishwrapper officially and unequivocally encourages voters to support Pussyhat-Wearing Venti Double Shot Latte with Hemp for the democratic primary in March.

This candidate has everything we want. Here are their main selling points:

Fluency in conversational spanish. (Priority #1) Just the other day, Pussyhat-Wearing Venti Double Shot Latte with Hemp impressed The Fishwrapper staff by correcting an idiot, explaining that “It’s horchata like ‘or-chah-ta,’ and I know that because I respect Latinx voters.”

This gives The Fishwrapper staff confidence that PWVDSLWH is wordly, brave, and will be a strong advocate for all people of color.

Wants to abolish ICE. PWVDSLWH is adamantly anti-ICE, calling it “absolutely disgusting” and swearing to abolish it once elected.

Gets Adversity. PWVDSLWH has experienced a bunch of adversity. Constantly living in the shadow of the larger and more successful Coca-Cola, they are that Cornpop. They come from a coffea farm in an underserved neighborhood. They are one of you, and they will fight for you. PWVDSLWH has used that top-shelf bottled answer in every interview thus far, and according to every news publication, that’s what it means to be a champion for black coffee voters.

Locally Sourced. This candidate is locally sourced from Cafe Allegro, and we at The Fishwrapper like that very much. It is probably very cool, community-oriented, and ultra-relatable.

Environmentally friendly. They only wear recycled, compostable materials. They live their ideology and would probably be very politically courageous.

Wants medicare for all. PWVDSLH has made medicare for all (except the hemp intolerant) a central component of their campaign. They are also a lifelong advocate for those suffering from ADHD.

Got us through finals. Thanks to PWVDSLH, students everywhere live to see another day. The candidate has monumentally improved students’ lives.

Doesn't talk about boring things and is funny, fiery, and ferocious. Not once has PWVDSLH brought up the military-industrial complex, the school-to-prison pipeline, food insecurity, aid to Yemen, ending Saudi arms sales, the wall, or other dumb stuff like that. Yawn. Also, their website has great stickers.

An absolute snack. PWVDSLH is so hot.