Crack on Back: An Unpublished Work Exposing Dr. Suess’s Deep Love Affair with the Devil’s Dandruff 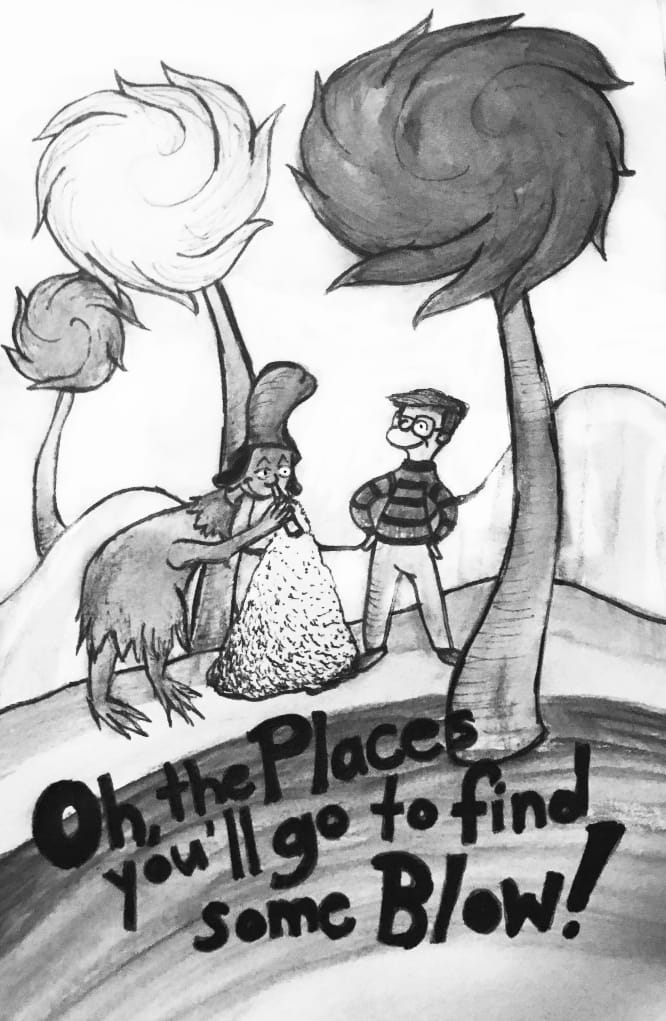 Was the late and much-loved Dr. Suess a devoted dabbler in Disco Dust?? Did he have the proverbial monkey on his back, or as he might have said, “crack on back”? In a journalistic coup not seen since the Pentagon Papers, freelance correspondent Phelan Brown unearthed a heretofore unpublished verbal manuscript that Suess insisted not be released until 1+2+3+4+5+6+7 years after his death in 1991. The Fishwrapper recently released the complete transcript, a sample of which is reproduced here:

Since its release, Barbara Bazooka-Bainbury, a woman claiming to be employed as a nurse under Dr. Suess (whom she described as a demanding lover with no liver), has come forward to disclose that “Dr. Suess was constantly writing himself very long-winded and strikingly beautiful prescriptions for hydrocodone.”

“At times, it seemed as though that wocket in his pocket—his prescription pad—was his best friend,” Bazooka-Bainbury continued. “And he wasn’t even a real doctor. That wasn’t important. It was all about imagination for him. Oh the things he could think!

A re-examination of some of Suess’s more popular works reveals a dark symbolism to prose that once seemed innocuous.

The cat, ignoring their insistence that he leave, smothers their clean house with pink ink. It is now obvious that the ink is an allegory for a drug that, once permitted in, they cannot rid themselves of. The dealer cat spreads more and more of it through their house (lives) until finally, the cat brings in Thing 1 and Thing 2, thinly-veiled symbols for Suboxin, a medicine used to fight opioid addiction.

Similar stories of addiction are riddled throughout many of Suess’s other famous works: And to Think I Saw It on Mulberry Street, Wacky Wednesday, Green Eggs and Ham (weed), and Horton Hears a Who!