Ducks Brace, Knowing Naked People are About to Run Through Their Home 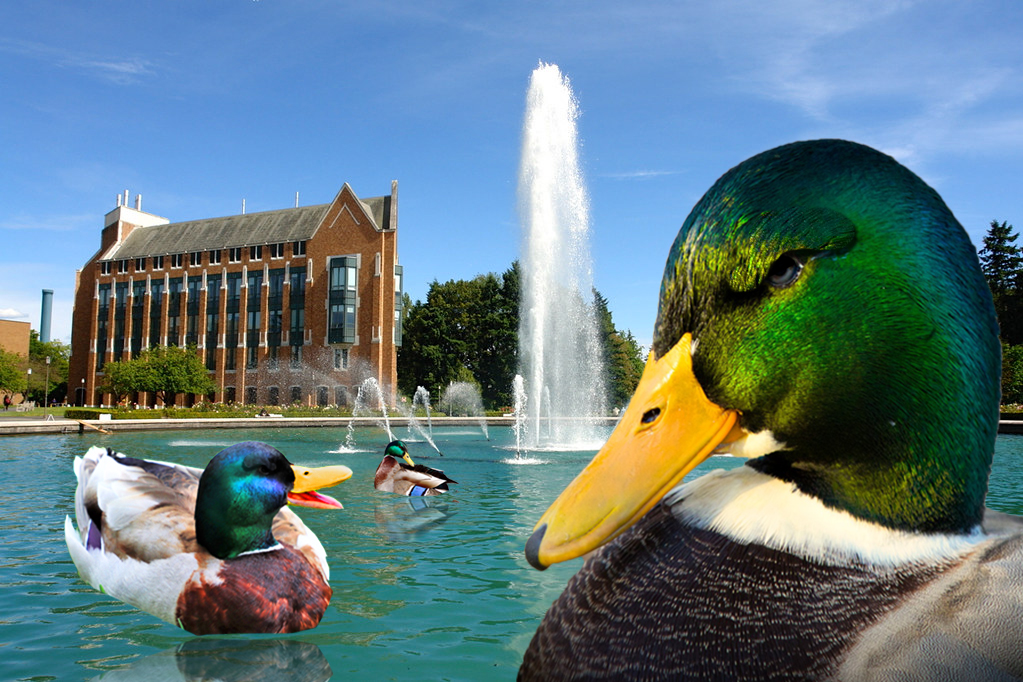 Created by Isabel Campisteguy, Courtesy of Wikimedia Commons and Pixabay

Every two years, the ducks of Drumheller Fountain prepare for its biennial cleaning and their biennial nightmare. While some in the duck community tolerate the ritual removal of their excrement and subsequent mob of nude students entering their home uninvited, most really don’t.

“This isn’t Woodstock for Christ’s sake,” quacked one brow-furrowed duck in an exclusive interview with The Fishwrapper. “Gees, do they ruffle my feathers. If I see one more bloated condom floating through my dining room, just one more crumpled Dick’s burger wrapper trapped in the waves of the waterbed, one more roach by my slide, I think I’ll lose it.” The community leader (who chose to remain anonymous) continued, “My cousin’s back in town for the summer -- how am I supposed to explain to them that I’m living in some kinda commie home where miscreant little students walk around in their ungodly birthday suits, kombucha-filled mason jars in hand, chattering among themselves, ‘free the nipple’ this and ‘save the bees’ that?”

While the sentiment of our first and eldest interviewee is certainly shared among those in its cohort, other ducks seem less disturbed with the alleged moral repugnance of the students’ immodesty. Rather, it seems to be the “viscerally disturbing” sight of human students’ bare bodies which cause bother. One interviewee was visibly shaken by the evident “grotesque bendiness” of the human body. “It’s knees bend backward before it jumps in. Sometimes I wonder, ‘did one of them accidentally drop their LSD in the water?’ And then I realized that I’m totally sober, and it’s reality itself that’s messed up.”

Per this duck, the whole week has lasting traumatizing effects on the community: “Living through BALLS Week is like a horror film sometimes, I swear.”

A note to the reader: BALLS stands for Beware All Long-Legged Swimmers [Pronunciation: ball-z].

Our interviewee went on to elaborate, “It’s one week of utter terror. Like a documentary about Robespierre all mashed into seven days, and instead of people getting their heads removed, their clothes are removed. Equally terrifying.”

In the midst of BALLS Week, The Fishwrapper sends its thoughts and prayers to the duck community. Stay safe out there, ducks. Keep a wary eye out for the inevitable Giardia outbreak which will no doubt ensue after all of the humans replace your feces with their own.