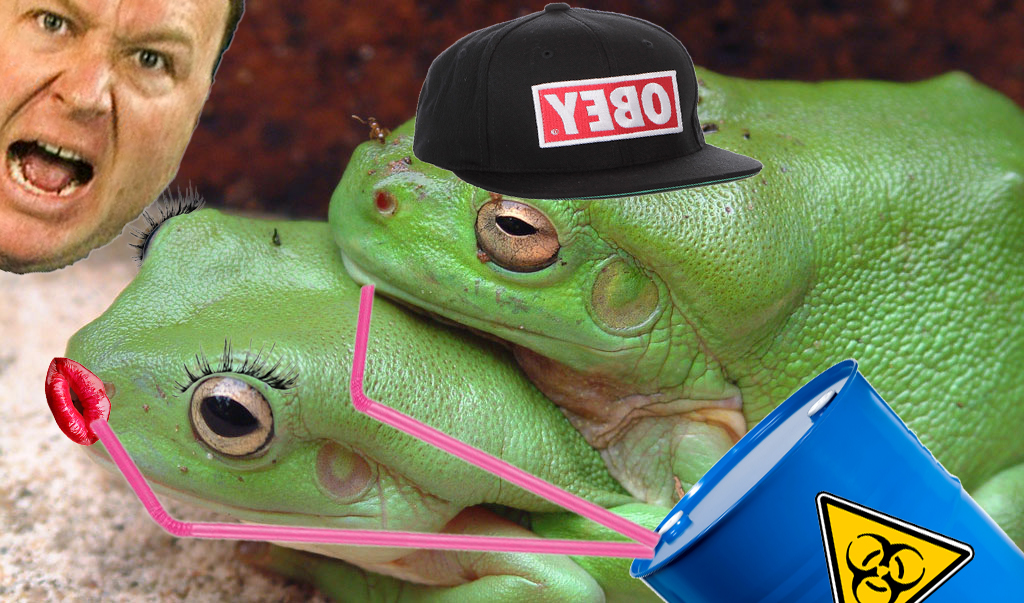 A group of Princeton researchers published a groundbreaking study last Monday demonstrating that chemicals are turning frogs straight. The report is sure to cause shockwaves, challenging the established knowledge that the “Deep State” is, in the words of Info Wars’s investigative journalist Alex Jones, “turning the FREAKIN’’ frogs gay.”

When the study began, the researchers strove to develop a mathematical equation representing the relationship between frog gayness and micrograms per milliliter per chemical.

After testing nearly all items on the FDA’s “Naughty Chemical” index, the researchers noticed a discernible difference between their control and test groups. Under every tested scenario, male frogs in the test group began buying subscriptions to Sports Illustrated while female frogs began putting on false eyelashes and considering joining SoulCycle. In contrast, male frogs in the control group continued “bringing back Madonna” and debating whether Perrier or San Pellegrino is better (as they were). Female frogs in the control group continued their morning routine of Stevie Nicks and picking out their flannel or Hawaiian shirt of choice for the day.

Per Jones, the breakthrough is expected to save the “Deep State” an approximate $300 million, allowing its well established “frog gayification” program to allocate more resources to an amphibious spin off of Queer Eye, which in the opinion of The Fishwrapper, would be so so fun and would normalize a good culture of authenticity for once. Smart economists project that this would surely improve the economy in the long run, and even in the short term, the economy has seen a boost. Chemical stocks such as ChemTrails Inc. and Oreo were sent soaring as white evangelicals, assuming similarity between frog and human physiology, flocked to purchase remaining supply for their summer camps.

The Princeton study has received a great deal of press recently, most of which has come from Vice President Mike Pence, who recently called it a “gift from The Almighty.” before enthusiastically pushing a cloudy water bottle with a Chem Trails Inc. logo towards a reporter from The Fishwrapper. He too has invested recently in Chem Trails Inc. stocks.