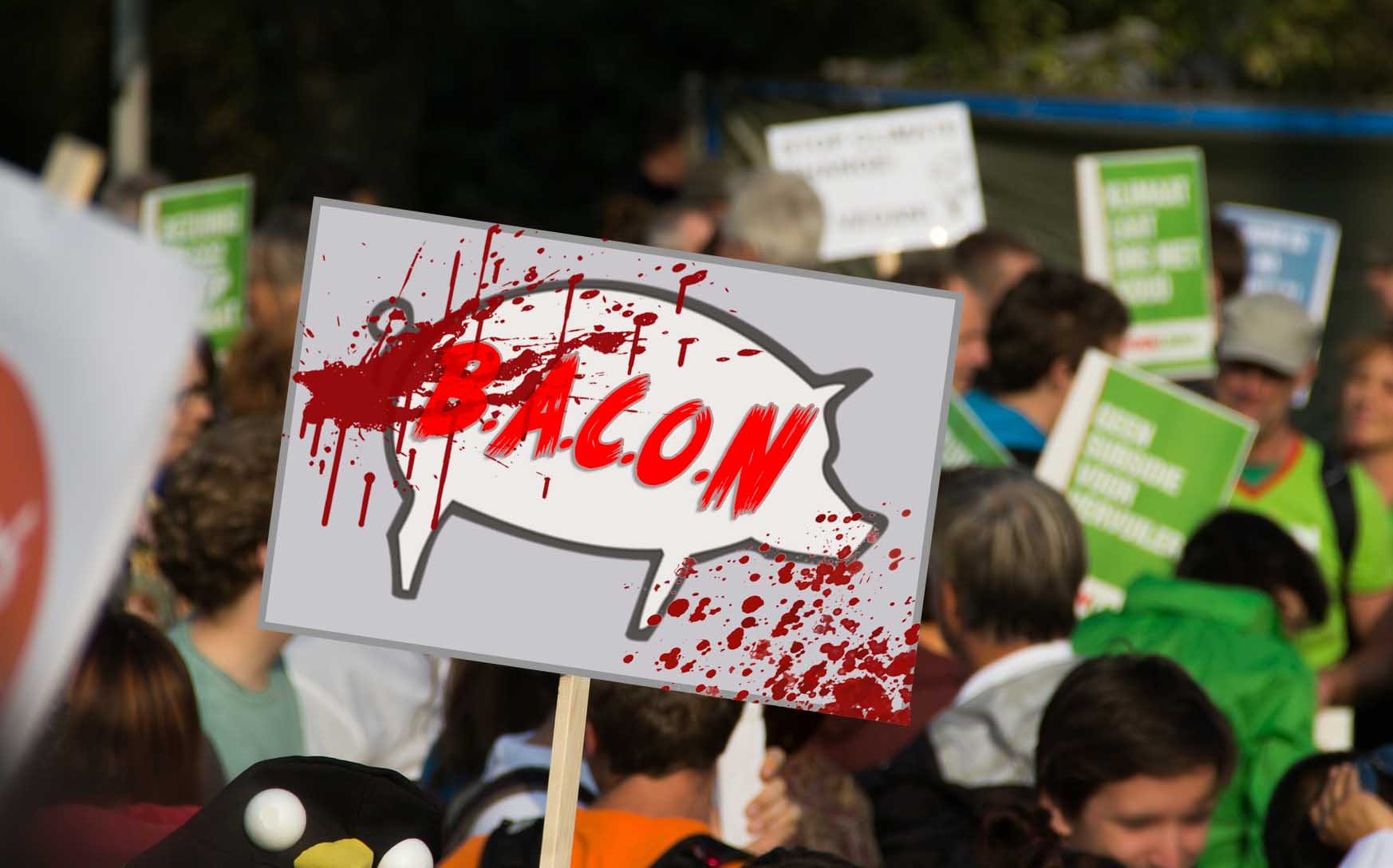 The vegan activist group Ban Animal Consumption Or Nudes (BACON) has recently received attention for its practice of hacking into secure devices and publicizing the nudes of local politicians who refuse to support vegan legislation, but following the death of a houseless man last week, BACON is now being questioned for murder.

The discovery of the man (name withheld)’s body last week coincided with a highly publicized demonstration led by BACON in which its members doused themselves in what appeared to be blood in the middle of a busy downtown intersection.

The demonstration, as explained in a BACON press release, was held “in protest of the violent and bloody slaughter of animals in the meat industry” and has been described as “highly graphic” and “surprisingly effective” by witnesses. It gained particular notice because of the use of what appeared to be “several buckets full” of real animal blood.

“You could smell the iron,” Taylor Dao, who witnessed the demonstration, said when asked about the blood. “I assumed it was pig’s blood or something. That seemed kinda ironic, them being vegans and all.”

Dao added that he has “been unable to even look at a hamburger without wanting to puke” since the demonstration.

Linea Richards, BACON member and participant in the demonstration, denied that the red substance was from any farm animal.

“If you think we’d stoop so low as to use cow or pig’s blood in demonstrations against the murder of these creatures, you’ve got BACON all wrong,” Richards said. “We’re not hypocrites.”

Concerns regarding the origin of the blood became more pronounced when a male body, later identified as a local houseless man was found, completely drained of blood, a mile from the BACON demonstration on that same day.

“Was it a powerful and strangely beautiful protest? Yes. Did they murder a man, drain the blood from his body, then dump it on top of themselves in the middle of the street? Maybe. Am I ever going to consume animal products again? Hell no!” Edelman said at a press conference.

When asked whether they would condone the use of human blood in such demonstrations, Richards was far less explicit.

“Honestly I don’t get what everyone is so flustered about,” Richards said. “I mean, he was a bum. He didn’t have a family like cows or turkeys or crabs do. Plus, the homeless have some of the lowest rates of veganism of any population.”

Richards responded “No comment” when asked if this trend of animal-product consumption among the houseless had anything to do with systemic economic inequalities and the high monetary cost of maintaining a vegan diet.

The Fishwrapper reached out to a different vegan activist group, Humans Against Meat (HAM) to see if they had any opinions about BACON’s potentially violent tactics.

In a response via email, Sam Northrop, HAM press secretary stated that, “You’ve got to crack a few eggs to make an omelet.”