Woman Mugged on The Ave in Plain Daylight, Points Finger at Notify.UW 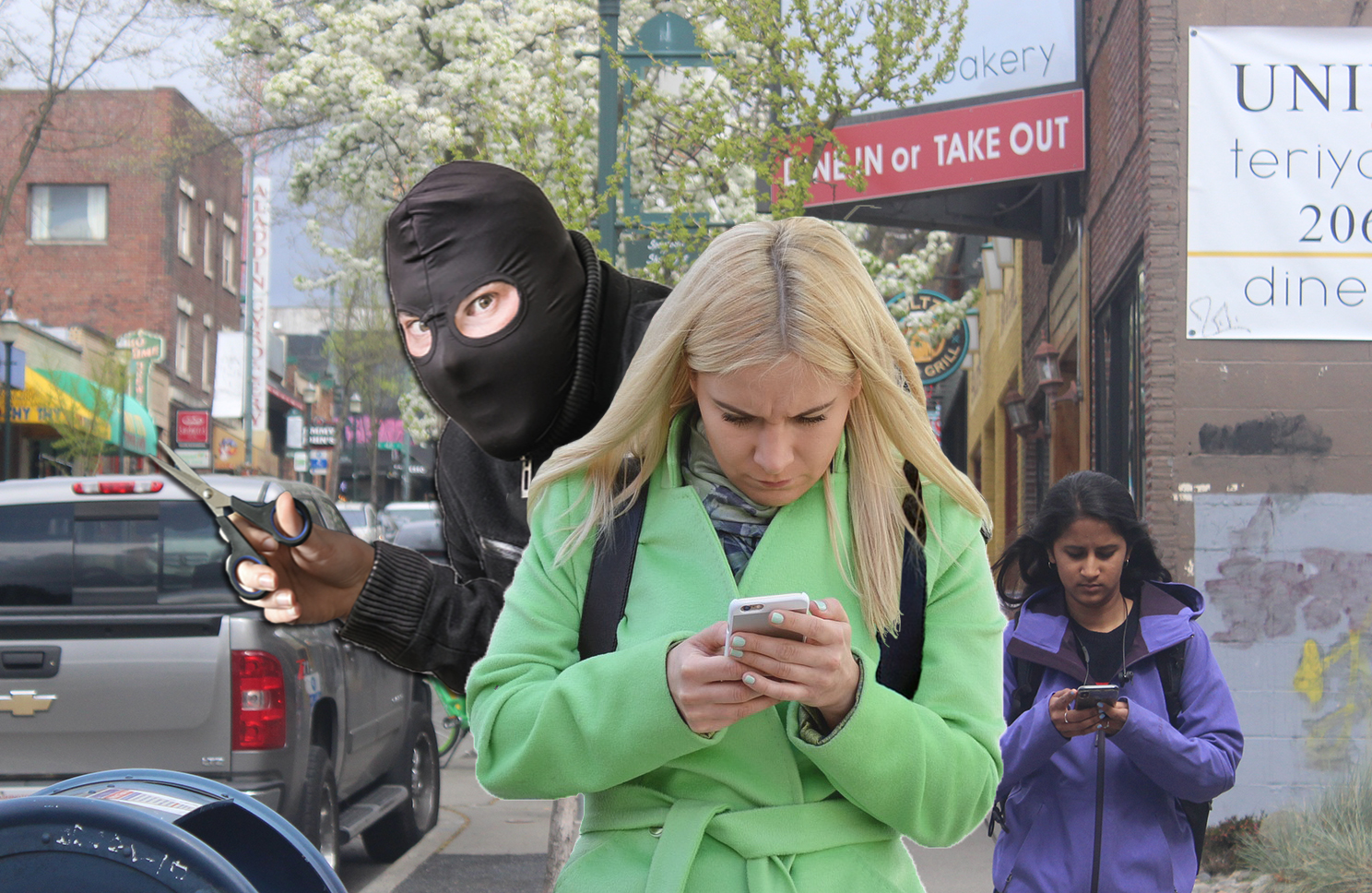 UW SEATTLE — The UW police department sent out a “Notification of Criminal Incident” reporting a mugging on the Ave at an unusual time last Tuesday.

On Tuesday, March 26, 2019, around 1:15 PM, a woman reported being mugged in the area of University Way and 41st Avenue NE. Her backpack was stolen right off her shoulders.

According to the alert, there were “no reports of assault or threats of one”; the thief simply slipped her North Face backpack off of her shoulders and left without struggle.

While the majority of the alert looked like a standard message from UWPD, its crime prevention tips for similar incidents were clearly custom-made. In this case, instead of the usual warning to “avoid confrontations,” something in which this woman clearly excels, it read “avoid distractions, like texting and web surfing while in potentially dangerous areas.”

The message has led many to suspect that the woman must have been glued to her phone, and a fountain of criticism has cropped up among the campus community blaming the victim’s misfortune on her phone addiction.

In response to calls for clarity regarding the event, UWPD officer Jeremy Davis, who wrote the message in question, voiced his reasoning for the changed language. According to Davis, three other crimes with stunningly similar strategy took place in the hour preceding the mugging in question, prompting Davis to alter the message in the notification to offer more specific instruction for remaining safe.

The victim, Chloe Roache, also contacted The Fishwrapper to set the record straight with regards to what happened that day.

“The UWPD didn’t tell the whole story. It’s true I was on my phone during the whole mugging, and I barely even noticed it had happened. But no one ever asked me what I was even looking at,” Roache explained. “I had actually just gotten a text from Notify.UW, and those notifications are way more urgent than anything UWPD has ever sent me. I’ve been trying to get into this class that filled up while MyPlan crashed on my computer during registration, so when I got that text, not even the piercing scream of one of Haggett’s microwave-popcorn-fire-induced alarms could tear my attention from MyPlan. There’s no way I was going to notice some guy with scissors.”

Roache, a second year student but a freshman in credits, has had an improbable amount of bad luck trying to get into the prerequisites she needs to double major in Informatics and Business, and as a result, has developed a near-Pavlovian response to seat notifications.

“When I see that 227-33 pop up, my sympathetic nervous system kicks into high gear,” she said. “My vision tunnels toward the only thing that matters in that moment: remembering that SLN code, typing it into that infuriatingly small box, and then hammering the ‘register’ button. I don’t hear. I don’t think. My brain is just time schedules, MyPlan, add codes, and the anticipation of the sweet dopamine rush I get when I actually make it in. But I never do.”

During this adrenaline-fueled quest to get into her class, according to witnesses, the thief managed to cut the straps of Roache’s backpack and take off before the registration page even loaded. Although she dimly noticed the weight being lifted from her shoulders, she thought the feeling was just the relief of finally getting into the course. It wasn’t until she saw that her class was full that she came to and realized what had occurred.

Despite being admonished by the police for being distracted, she has stood by her story and asserted that what happened wasn’t her fault. Roache explained, “I wasn’t about to lose my chance at getting into this class just to see what was going on around me. If I had to do it all again, I wouldn’t change a thing.”

Roache is not the only student who has fallen victim to the focus-snatching power of Notify.UW.

“Honestly, I barely even heard a thing,” said one bystander, who was trying to get into another class.

The Fishwrapper managed to find the lucky student who actually made it into the class at the time when the event occurred.

“She was never going to get into it. I paid someone who I knew was dropping it to tell me when they did it, so I enrolled before anyone else had the chance,” said the lucky student, who wished to remain anonymous for fear of retribution.

Since the incident, UWPD has sought to create more incentives for students to lend their attention to what the department perceives to be “very important messages.” While some faculty members espouse a new measure to create a point system for brief student summaries and replies to UW Alerts and notifications, most feel -- and are supported in feeling -- that nothing can match the near sinister tunnel vision which overwhelms unsuspecting student prey when Notify.UW appears on their screens.

“It’s one of the great problems of our time,” Officer Dahmar Smiles offered in a recent UWPD meeting. “The power of Notify.UW is terrible. A true force to be reckoned with and a torturous opponent to struggle with.”

While more muggings will surely occur at the hands of the Notify.UW system, The Fishwrapper advises UW’s student body to have hope, for Notify.UW’s reign of terror can only last as long as the drop period stays open.